0
You have 0 items in your cart
Go To Shopping

Back when King George V. (1819 – 1878) of Hanover made Marienburg Castle a gift to his wife, Queen Marie (1818 – 1907), he had no idea that his token of love would one day become one of the most impressive historic monuments in Germany. In its design, Marienburg Castle is reminiscent of a medieval hilltop castle. Its fairytale-like appearance is owed to the Queen’s wish for a romantic summer residence.

George V. himself was never able to see the gem built by architects Conrad Wilhelm Hase and Edwin Oppler between 1858 and 1867 with his own eyes, as he had been blind from earliest childhood. But also Queen Marie only got to live in her castle for a short period of time, because already in 1867 she had to follow her husband, who had lost the war against Prussia the previous year, into exile in Austria.

Today Marienburg Castle has become what Queen Marie always dreamed it to be: a center for music, art and culture. It’s especially impressive because of the almost entirely preserved interior and the lavish outer appearance. You can still visit the state rooms and private chambers of the royal family, the Queen’s library with its beautifully decorated umbrella vault and the fully preserved castle kitchen.

Love of a Lifetime

The romantic vision of a medieval castle was a birthday present of King George V of Hanover (1819-1878) to his wife Queen Marie (1818-1907). Marienburg Castle was built between 1858 and 1867 as a summer residence for the Queen, who had long wished for a refuge from official court life. The building was designed in the neo-Gothic style, which was highly popular at the time. At the time of construction, King George V could not know that his love token would once become an important historic monument in Germany.

Until 21 years earlier – and for the more than 120 years between 1714 and 1837 – there had been virtually no royal court in Hanover as the House of Hanover had ruled the kingdoms of Hanover and Britain by personal union.

During that time the monarchs had lived almost exclusively in London, and Hanover was largely lacking in the architecture typical for a royal capital. Perhaps that is why the “little country seat” the Queen had wished for grew into this magnificent stately home.

The architect commissioned to build the castle was Conrad Wilhelm Hase, one of Hanover’s most influential architects of the time. In 1864 he was succeeded by his former pupil Edwin Oppler, who fitted out the interior and made some changes to the design.

In 1866, while the castle was still under construction, war broke out between Prussia and Hanover. After Hanover had been annexed by Prussia, King George V left the country and went into exile in Austria, where Queen Marie joined her husband one year later.

Because of the war, Marienburg Castle was never finished. The castle was left uninhabited, and it remained so for almost 80 years with only a caretaker in residence. For this reason, the original design is almost completely preserved.

Awoken from its decade-long sleep, Marienburg Castle now casts its spell on visitors again with its fantastical architecture and its fairy-tale appearance. Today the almost completely preserved interior and the countless turrets and pinnacles still overwhelm the fascinated guests. 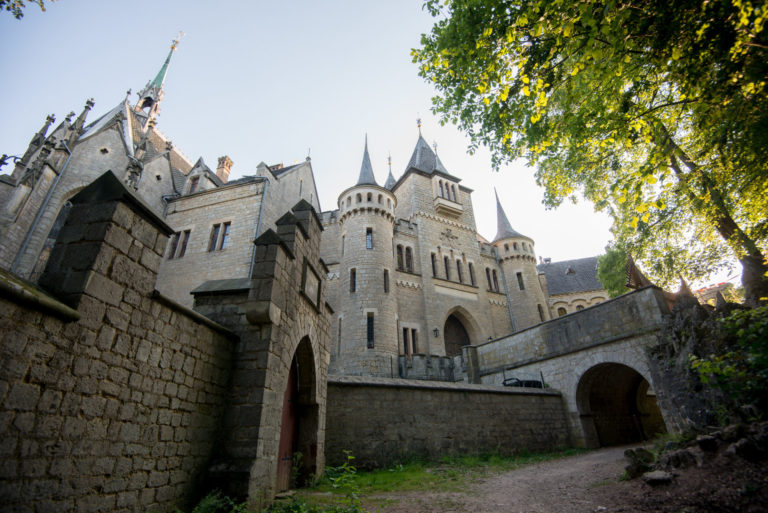 Marienburg Castle is still private property of the Royal House of Hanover.